The clan system's GUI has got an update which makes it possible to warp inside the menu, see stats on clan claims and items.
Open with /cl gui

In the warp list all warps are shown, and how many warp tokens you have left.
Click on a warp to warp there.

The total at the top shows how many items that the clan has in total in all clan claims, even items that are not special items.
Below shows the number of items for each rarity. 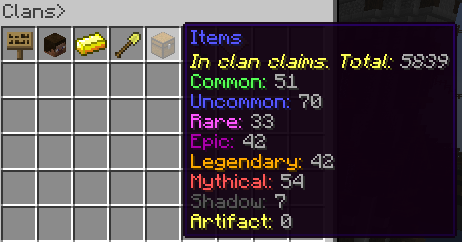 A new thing in claims in the menu is that you can see the total value in dollars for all clan claims if you would sell the items in Scrap.
Claim ID for the claim that is the most valuable is shown too.

You can now see if the clan can raid other clans, and why you can't do it if there is a reason for it.

A bug where you could take deathchests in spectator mode is now fixed.
New players now get 3 Death Tokens in their personal tokens inventory. /tokens

Lootboxes deployed alongside each other will no longer become double chests.
A bug that prevented lootboxes to be placed on certain places (ex. caves) is fixed.

You can now click on the text in the chat to directly accept or deny a party invite.

New GUI (/dg gui) where you can handle your party and go in and out of dungeons.

Rifts max level is now increased to 8 instead of 5, but is a little more rare.
Higher level gives better drops, but it is more difficult.